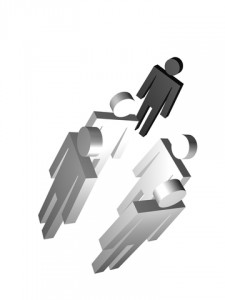 “Though the colored man is no longer subject to be bought and sold, he is still surrounded by an adverse sentiment which fetters all his movements. In his downward course he meets with no resistance, but his course upward is resented and resisted at every step of his progress. If he comes in ignorance, rags, and wretchedness, he conforms to the popular belief of his character, and in that character he is welcome. But if he shall come as a gentleman, a scholar, and a statesman, he is hailed as a contradiction to the national faith concerning his race, and his coming is resented as impudence. In the one case he may provoke contempt and derision, but in the other he is an affront to pride and provokes malice. Let him do what he will, there is at present, therefore, no escape for him. The color line meets him everywhere, and in a measure shuts him out from all respectable and profitable trades and callings.”


It’s obvious to say that workplace discrimination happens when an employer mistreats an employee or job applicant because of that person’s race.  However, most employees go for a long time being mistreated simply because they don’t want to believe a supervisor is a racist (particularly in a society that uses offensive language like “pulling the race card” to discourage good people from standing up for fair treatment).  But if you are feeling like you are being treated badly, and nothing really explains why it is happening, the idea that you are being discriminated against starts to become more of a reality.  The wrongdoer can be a boss, supervisor, manager, human resources representative, or coworker. Plus, you don’t have to think that the person who has mistreated you is the most evil person who has ever walked the earth; even people who present themselves as being fair-minded can make bad decisions.  It’s when those bad/racist/biased decisions have impacted on you that the decision maker, either Evil Incarnate Manager or Just Kinda Backwards Boss, need to answer for the damage they have caused.

This is of course not a comprehensive list of the ways in which discrimination rears its ugly head at work, but it is a list that you may be more familiar with than you would like.  If you are experiencing any, or many, of the above discriminatory actions, or some other form of mistreatment, please understand that it is in the vested interests of the wrongdoers to make you feel guilty or hesitate to pursue potential legal claims.  Contact an employment attorney to discuss what’s been happening to you. We know how this works, and we want to help.